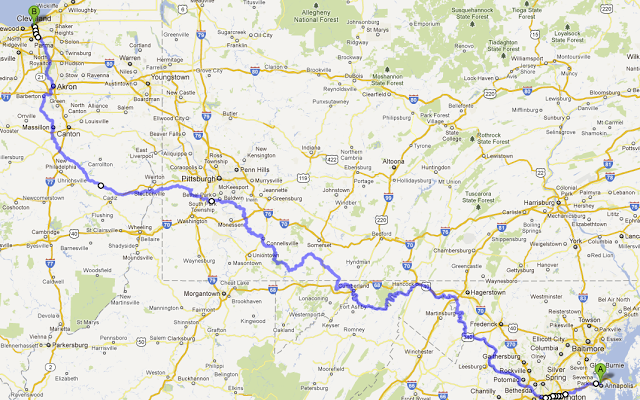 Over the last year I have come to the realization that I will never amount to much as a competitive cyclist from a Palmares standpoint, meaning I’m never going to win races or even place in races, and thus my Palmares (“List of accomplishments”) will never get beyond my first race – 1st place in the Greenbelt C race in 2008. The reasons for this are many, take your pick: too distracted to train enough, didn’t pick my parents well enough, worried about injury or many more, yada, yada, yada.

So what’s left? This realization doesn’t mean I won’t keep riding or racing competitively within the above boundary conditions because I love the competitive nature of riding with a group, especially the ABRT people and I will try as best I can to help other team mates in races. But, I have to reevaluate what kind of riding I am going to do to fill the “it feels good to win” itch. The issue is how I define “winning”.

Last year I rode an endurance ride that went from Boston to Windsor VT, 148 miles in a day as part of the Harpoon Brewery to Brewery Ride. Harpoon has a brewery in both places and you ride from one to the other, drink some beer and take a bus back to Boston. It was challenging and very rewarding from a personal accomplishment standpoint, especially since I really didn’t train much for it due to a leg injury. This got me thinking that endurance events are the vehicle that can scratch that itch.

So WTF, Cleveland? I love maps and I enjoy messing with Google Maps, especially the bike route feature. I started looking at off road bike routes and how far one could go on them from this area – there are all of the local trails/routes as well as the C&O and the Great Allegheny Passage all the way to Pittsburgh. Spurred on by former ABRT rider and friend James Prickett’s solo trip to Pittsburgh and back in 2007 (see awesome photo gallery), the fact that I haven’t seen friends in Cleveland for some time, and having recently looked at some maps south of the Cleveland flats, I let Google plot a route from Annapolis to Cleveland. It was pretty good as is, but with some strategic massaging, I got most of it to be off road trails and tow paths. Here’s the route, you can click on it to better explore it: